Effect of Parent’s Arguments on Children 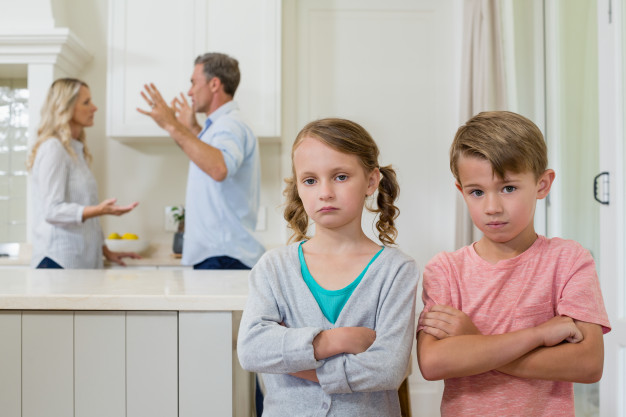 Parents won’t be surprised when they learn that kids suffer when they fight with each other. It is normal for partners to have disagreements over things but they often forget that their arguments with each other affect the child. Children look up to their parents for everything. How parents get on with each other plays an important role in a child’s well being and even has the potential to affect studies and other relationships. The effect of parent’s arguments on children is way beyond one can imagine.

Every child responds to parent’s fight in different ways. Some kids remain unaffected whereas other kids are highly impacted. Most kids get scared when their parents argue. Arguments between the parents are the reason which makes a child feel scared, sad, or upset. Even parents have an argument and don’t talk to each other even that situation can be upsetting for the kids.

Kids try every possible thing to stop the arguments between their parents. When parents have an argument over their kids or anything related to them then kids blame themselves and feel guilty for everything. Children don’t like arguments because it makes them come to the conclusion that their parents don’t love each other and will end up getting separated.

Read on to understand some of the effects of parents fight with each other on children:

Aggression: Remember, children learn from their parents. When they see their parents arguing with each other they develop a feeling that being aggressive is the only way to put the thoughts forward. They try to solve all their problems in a similar manner i.e. Being aggressive.

Emotionally Weak: They find themselves alone. Even though they have parents around but constant fight and arguments between the two make children believe that they don’t have anyone to support them. They become morose and find it difficult to express themselves.

Health Problems: Children start walking away from all of their issues. They become more stressed and unhappy because of the arguments. They indulge in activities that affect their health. Some of them might start smoking or others might start eating too much which only gives them more problems than solving them.

Effect on Studies: It is one of the major activities which is affected. When children are stressed, they find it hard to concentrate on their studies. They might fling their exams or find all the excuses to rescind studies.

Relationships: Parents are every kid’s role model. They have the ability to paint the picture of any relationship. When children see their parents fighting their concept regarding the relationship changes which hampers their future relationships. They develop an image that couples who fight cannot love each other.

Minimize the effects of parent’s arguments on children:

Sometimes you will agree with your partner and at times there might be a disagreement. These disagreements might turn into a verbal fight or an argument. However, parents often forget that their kids are the one who are witnessing that fights and it may impact a lot more than they can think. Yet there ae a few steps that as parents we can consider to take control of the situation.

Talk to the kids: Help them understand that parents can have arguments with each other and still love each other. Give them an overview of the fight. Something like” Hey sweety! Mom and I just had a discussion regarding so and so”. This will help the kids understand that every relation has ups and downs but what still matters is that they are together and are happy.

Parents often fail to understand the effect of parent’s arguments on children but it is important that very thing is conveyed to them in a proper manner. Assure that couples can fight and still be happy with each other. They are together in everything that they do. Prove it through your action that family stays together no matter whatever happens.

Building a strong family bond is one of the critical steps for healthy parenting.